28/04/2020
The three levels of consciousness considered one by one.

1. The waking state (this can also be thought of as the dream of the waking state because there is a fourth higher level). When referring to the tabernacle this state is symbolised by the outer court (outside the tabernacle in daylight) in which the alter is located.
2. The dream state which maps onto the inner room of the tabernacle which is in darkness but is lit up by the flickering half light of the candlestick.
3. The sleeping or deep sleep state equates to the most holy place which is in complete darkness all the time. Inside the most holy inner room is the ark of the covenant which represents the presence of God.

The fourth level of reality called turiya is (in tabernacle symbology) pointed at by the the high priest who enters the most holy place once a year with the blood of the sacrifice. The most holy place is generally off limits to conscious awareness (people) making it the perfect representation of the sleeping state. Once a year however - under certain conditions - consciousness (the high priest) is allowed in. This points to a higher level of reality that is not normally accessible but is nevertheless available under certain conditions. This level of reality is the unitive state of consciousness where God and man meet. It could be described using the apparent contradictory term of conscious sleep or non-dual consciousness where there is no self and no other only pure consciousness. 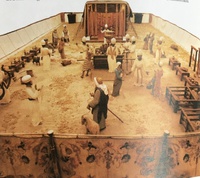 We use cookies to enable the proper functioning and security of our website, and to offer you the best possible user experience.

You can customize your cookie preferences here. Enable or disable the following categories and save your selection.